Bowhunting: Should I Use A Release Aid And Why?

Those that are new to the sport of archery often become overwhelmed at the onslaught of information that presents itself when one is attempting to decipher which gear they should purchase.

Questions such as, “Should I use a release aid, and if so, why?” are common among those that are new to shooting a bow.

The answer to this question can fall on either side of the equation and is often situational. While the use of a release aid might be ideal for one archer, the opposite might be true of the next individual.

The Purpose Of A Release Aid

A release aid is a mechanical device that is used by an archer to facilitate the release of his or her bowstring, thus propelling an arrow downrange.

Release aids are popular with archers because they achieve a smooth, concise, and consistent string release during every shot. This eliminates a great deal of human error, maximizing accuracy along the way.

Is A Release Aid For Me?

A great deal of an archer’s choice of whether or not to utilize a release aid comes down to the type of bow that they choose to shoot.

The remaining portion of this decision-making process is simply a matter of personal preference.

When taking both of these factors into consideration, you can decide whether or not a release aid is right for you.

The use of a release aid with a recurve bow is far less common than with its modern cousin, the compound bow.

There are several reasons for this, with the bulk centering on the unique properties and draw cycle of a recurve bow in comparison to the compound bow.

A recurve bow lacks the cams that are utilized in modern compound bow construction. These cams allow a bow’s draw weight to be significantly reduced when at full draw.

Let-off percentages of 70%-85% are quite common among modern compound bows.

In the absence of these cams, a recurve shooter is left to hold their bow’s entire draw weight at full draw. This is a task that can become tedious when attempted in conjunction with a release aid.

Additionally, traditional archery, especially when conducted in a truly instinctual manner, relies heavily upon the ability to shoot in what could be closely described as a snap shooting fashion.

This can be difficult to replicate when being forced to physically position your hand as needed to trip a release’s trigger, when already at full draw.

Many recurve archers also shun the idea of release aid use due to the sentiment that this is not a purely traditional means of shooting.

Although not as popular today, there was once a crossover period in the years before the compound bow’s rise to prominence, where many recurve archers began using newly marketed release aids.

Any compound bow with an axle-to-axle length of less than 40 inches is prone to these hindrances.

Additionally, the use of a release aid significantly reduces the chance of string derailment due to unintentional string torque.

While string derailments are not common, the chance of such mishaps is increased exponentially when shooting with fingers.

With the sharp draw angles commonly featured in today’s modern compound bows, very little string torque is required to induce a string derailment event, which can often lead to injury or significant damage to a bow.

The use of a release aid minimizes the chance of string torque, thereby potentially reducing the prevalence of catastrophic bow failure.

Another advantage of release aid use when shooting a compound bow is that it typically yields an increase in arrow speed and aids in consistent arrow grouping.

When using a release, variables such as how you release your grip on the bowstring are eliminated. In doing so, a consistent string release is replicated time and time again.

Each type of release aid offers its own distinct set of advantages and disadvantages, making it pertinent that an archer selects the design that is best suited to their needs.

An index finger release is worn around an archer’s wrist with the use of a strap, and features a dedicated trigger mechanism that closely favors that of a rifle.

When a bow is held at full draw, the archer will line up his or her sights, and slowly squeeze the trigger. This is a favored release of bowhunters.

The thumb trigger release is held in the palm of an archer’s hand and is triggered at full draw by manipulating the trigger with your thumb. 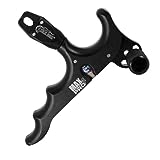 This release can be used much the same way as a back tension release, while also maintaining trigger control, and is highly favored by target archers.

Releases that require back-pressure for triggering, such as hinge or resistance variants, are also very popular with target archers.

These releases are triggered by narrowing the distance between your shoulder blades at full draw through back muscle manipulation.

Although the decision of whether or not to use a release aid is largely based upon personal preference, there are many times when their use can be quite beneficial.

In general, when shooting a compound bow, the pros of using a release far outweigh the cons.

When shooting a recurve bow, many feel that the opposite is true. If you do choose to use a release aid in conjunction with a takedown recurve bow, it is vital to carefully consider the style that works best for you. 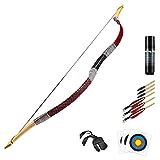 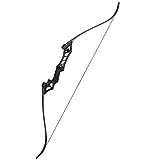